Amazon has finally fixed their issues with Kathy Steinemann’s IBS-IBD Fiber Charts and now have both the paperback and the Kindle versions online. As I mentioned in yesterday’s post, I wrote a foreword and a short story, How Not to Prepare for a Colonoscopy, for her book.  If you’d like to purchase a copy from Amazon, here are the links:

You can also find links on my new Amazon Author Central page, located at http://amazon.com/author/dleejackson.

Please grab yourself a copy and let me know what you think via the Contact page. Thank you for reading!

I am now officially published! 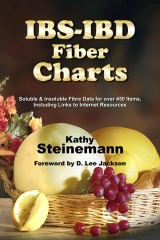 No, Tapper hasn’t been finished and published yet, but a couple of other items have been, thanks to good friend and fellow Scribophile Kathy Steinemann. She is the author of the book, IBS-IBD Fiber Charts: Soluble & Insoluble Fibre Data for Over 450 Items, Including Links to Internet Resources, which is now available on CreateSpace, on Barnes and Noble, and on Amazon (although Amazon seems to be having problems getting the right version posted). I wrote a foreword for the book (as listed on the cover). I also contributed a humorous short story, How Not to Prepare for a Colonoscopy, which is included as part of the end material (an appropriate placement, given the subject matter).

The book is chock full of information to help people with irritable bowel syndrome and inflammatory bowel disease. I’ve suffered from the IBS-D version of irritable bowel syndrome since I was twelve years old. As I say in the foreword, I wish a reference like this had been available when I was finally able to control my own diet—my life probably would have been a lot easier.

In any case, the book will eventually be made available for Kindle readers (I’ll post here when the SNAFU is worked out), but until Amazon gets things fixed, hardcover is the way to go. In fact, if you go to CreateSpace and use the code QERP9EAF, you’ll get $3.00 off of the purchase price!

Comments? Questions? Please feel free to use the Contact page. Thank you for reading!

I have finally finished the eighth draft of my sci-fi novel, Tapper.

Man, that feels good to type. 🙂

I wound up with 32 chapters and a word count of approximately 99,000 words. The word count is down somewhat from the seventh draft, but only by around 700 words. Every time I’d find a section to cut or tighten, I’d find another bit that needed additional material. That’s just the way it goes, I guess.

Anyway, all 32 chapters are posted on Scribophile and are available for critique. I may wind up with 33 chapters, since chapter 31 is a 5,000+ word behemoth. It works as a single chapter, but it’s the longest chapter in the book. I’ve already asked for assistance in finding a good split point, in the event that I do want to change it.

Now begins the task of creating a sub-revision of draft eight, based on critiques. I want Tapper to be so highly polished that its shine blinds LibreOffice‘s “Export as PDF” function when the time comes to submit a completed manuscript to an agent.

Well, the relocation of chapter one of Tapper into the content of a later chapter was a guarded success. I say “guarded” because no one on Scribophile has critiqued my efforts yet. It took some doing, as we say in this part of the country, and it wound up creating a new problem—specifically, extra chapters.

I’ve already renumbered my chapters once. What used to be a 28-chapter work turned into a 30-chapter work (shorter than the 28-chapter version, believe it or not). However, the relocation of the original chapter one text into its new home (what was chapter eight) meant that I now had a chapter that was way too long. As in approaching 6,000 words long. There was only one solution: split it into two chapters.

I’d already done that with what was chapter five in the new 30-chapter order, mainly because I’d received feedback that one particular spot in an already long chapter (around 5,000 words) would work better as a “hook” to get the reader to turn the page and continue reading. I therefore had a chapter 5A and a chapter 5B. With the chapter one move and split, I now also had a chapter 8A and 8B. While that works just fine with Windows 10 filenames, it does not work with actual chapter numbers, especially as posted on Scribophile. There’s no provision for letters in the chapter names there—just part numbers.

Some background info on Scribophile—there’s a guideline that chapters should not exceed 3,000 words, or at least not by much. Anything significantly longer is supposed to be split into two parts. As a result, almost every chapter of the 30-chapter version was divided into part one and part two in my original postings. However, the leader of the Ubergroup received special dispensation for group members to post longer chapters to bypass the chapter splitting guideline.

To make a long story short, I had to go back into my LibreOffice documents, renumber every chapter, then put the longer versions up on Scribophile as single units. Renumbering the LibreOffice docs was easy enough, but there’s no easy way to renumber things on Scribophile, especially when you’re trying to get rid of chapter splits. I could delete the split chapters, but that’d mean I’d lose all of the critiques I received on the splits. I’d also lose potential critique spots (you get six for every post, and I had a bunch with only one critique spot left).

In the end, I had to haul out a spreadsheet to track what got consolidated, how they related to the now-32-chapter-long work, and note which Scribophile sub-chapters I’d renumbered and moved out of the main spotlight. It took almost two days to get the renumbering task done, and I still haven’t posted all of the draft number eight chapters in their correct spots (I’m only up to rewriting chapter 14 as I write this entry).

I don’t know if I could have planned this any better. Honestly, I don’t think I could, since the Ubergroup length exception went into effect while I was working on my music project. I guess the moral of this story is that you should be ready to make major changes to all parts of your novel—chapter numbering included—if you are serious about getting it published.