Our trip to Las Vegas was based at Bally’s Las Vegas Hotel and Casino. I have to start by saying that I wasn’t very impressed by it. For starters, the two showcase restaurants it had were both “temporarily closed,” and their other food choices consisted of a hyper-expensive mini-food court that was only partially open 24 hours a day, a deli that had horribly restricted hours, and a coffee bar that served overpriced everything. The room we stayed in wasn’t bad, but it was missing amenities like a coffee maker and a microwave – ostensibly to keep you from camping out in your room and to get you to use the hotel’s fare instead, according to my wife. The room was also quite arctic, depending on where you sat, and this unfortunately included the area where my laptop was located.

The casino was even more disappointing. All of the table games had minimum bets of at least $10, which priced them out of our range. We were stuck playing either the indecipherable penny slots (which appeared to be mostly of Chinese origin), or video poker at a bar. The latter is thankfully the one place where I came out on top during one session, thanks to a little bit of help from the bartender.

As I mentioned in my last update, everything seemed spread out over a vast distance in Las Vegas. This feeling was exaggerated by the fact that we did not rent a car. Instead, we walked almost everywhere we went – to the BattleBots arena, to the Las Vegas strip, and so on – something I was definitely not used to doing. My body let me know it was not happy, too. I developed big blisters on both big toes, one of which took over a week to disappear completely. I regularly dragged several yards behind my wife, who had to stop and wait for me to catch up to her. By the end of the trip, I’d built up a tiny bit of stamina, but my wife still insisted on putting me in a wheelchair when we got to the airport and having a Spirit Airlines courtesy employee push me to the gate.

But enough about that. What was the BattleBots tournament like?

Sadly, I’m going to be limited by non-disclosure agreements in what I can say before the show airs this coming fall/winter season on the Discovery channel. I can’t talk about who fought whom, who won, or anything like that. I can, however, describe the atmosphere of the arena during the shooting of episodes of the show.

We attended sessions that ran about four hours long, either from noon to 4pm or from 6pm to 10pm (both time slots taped each day – we only attended one). Each session began with a Master of Ceremonies instructing the audience on how to react during the taping. Generally, that meant a lot of standing up, yelling, and applauding like mad. I couldn’t stand with the crowd due to my handicap, so we sat in the first row of the arena on the “red square” side each day so I could see the action. 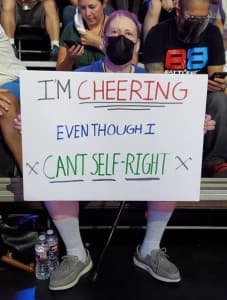 Several in the Thursday audience had made signs and/or had dressed up. That number increased toward Saturday’s sessions and included us in the sign making on Friday and Saturday. On Friday, I’d made a sign that referenced my inability to stand with the rest of the crowd when cheering. I likened my inability to that of a robot that couldn’t “self-right” after getting knocked over on its back. Hence, the sign you should be seeing me holding up – “I’m Cheering Even Though I Can’t Self-Right.” It got several laughs from knowledgeable members of the crowd, although it appeared to confuse the MC. 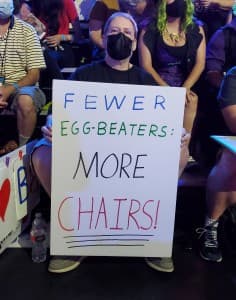 On Saturday, we both got into the sign-making fun. My wife made a “modular” sign with glued-on mini-clothespins that allowed her to make up new signs as the action unfolded. I recycled my sign, writing something on the back of it that was in response to an incident that happened during taping on Friday. I can’t go into more detail than that, other than to say you’ll understand why it says, “Fewer Egg-Beaters: MORE CHAIRS!” when the episode comes out.

Oh, how I wish I could tell you more. We saw robots do things that had to be seen to be believed. Mechanical carnage like you’ve never witnessed in your life. Trust me, when the shows start airing in November or December of this year, you will want to see them. I know from talking to people who saw sessions that we missed that there are some “OH MY GOD!” moments even in the earlier episodes.

Watch for them. On the Discovery channel. Don’t miss them. 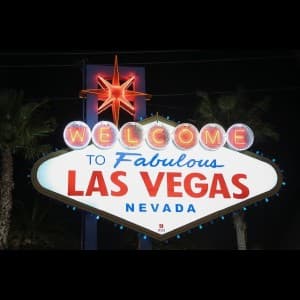 To pick up where I left off in the last update, I did indeed have a Deep Vein Thrombosis (DVT) in my left arm below the PICC line. As a result, I’m going to be on a medication called Eliquis for about the next 6 months or so. Eliquis is a blood thinner, so I have to be careful not to do anything that might cause myself to bleed. What a pain.

Anyway, my antibiotics eventually ran their course, my toe pain subsided, my PICC line was pulled, and I was discharged from Kindred. Way to wrap things up, eh? I came home on the 9th of August – a grand total stay of about a month across two hospitals. It took at least a week for me to re-adjust to life at home. I’ve since learned that almost all the gains I made in physical therapy for my left knee replacement have been lost. But, at least I’m no longer in a hospital.

This moves me along to the next portion of my update: a trip to Las Vegas to see the taping of the BattleBots tournament for the Discovery channel!

I did my best to keep my health in stable shape in the time between the hospital and our departure date, September 1st, 2021. I had to deal with a bout of Premature Ventricular Contractions (PVCs) in my heart, but my doctor put me on a medication that reeled them in. On the packing side, we hemmed and hawed over whether we were going to bring my monster i9-10850K laptop, since it and its packing case just barely met Spirit Airlines’ extreme outer dimensions (we did, and Spirit complained nary a bit).

The flight out was uneventful, although getting to it was anything but (pun intended). You see, I have learned that my butt sets off the Transportation Security Administration’s (TSA’s) bomb-sniffing booth at the security checkpoint. (It did this both going out and coming back.) I had to submit to a pat-down search – a rather personal one, at that – before I could go on to the boarding gate.

Arrival at Las Vegas was similarly uneventful, but then there was the walk from the gate to the exit. Ye gods, what a walk! If you’ll remember from above, I’ve lost all my physical therapy gains in my left knee replacement, and my feet complained similarly, not being used to such a grand distance nowadays. By the time we reached the taxi stands, I was thoroughly worn out and ready for some air conditioned seating on the road to our destination, Bally’s Las Vegas Hotel and Casino.

Of course, once we arrived there, there was more interminable walking just to find our way through the casino maze to the well-hidden elevators. Everything seemed to be spread out for proverbial miles in Las Vegas.

When I continue in my next installment, I’ll cover the rest of the trip, including what I can of the reason I went – the BattleBots tournament!