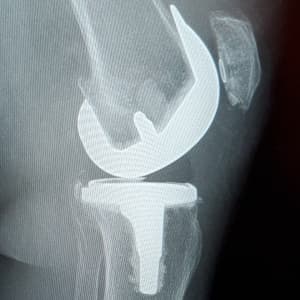 As you can see from the X-ray image on this page, my replacement left knee is firmly in place and doing well at the moment. My surgeon was indeed impressed with my walking progress, saying that most people at my stage were still in a walker. He was concerned about the edema (swelling) that affected my knee, both lower legs, and both ankles, though, but he was able to confirm that the knee replacement hardware was not the source of my knee’s swelling. Thank goodness for that.

Since that appointment, the swelling has subsided slightly, but it has left behind a different and somewhat disturbing problem: an open sore that used to be a blister, which refuses to heal. You see, the entirety of the swollen areas makes me itch and rub madly. I was not scratching at my left inner ankle a few days ago, so get that thought out of your head. I was rubbing it instead, when I came across what I thought was a small blister that had popped. I peeled back the loose skin, only to find much more than a small area peeling away. When all was said and done, there was a bare, oozing spot about 2 centimeters by 3 centimeters above my ankle.

My wife came in, promptly declared it gross, and applied a gel-based “burn bandage” to it. The next day, it had puffed up almost 1 1/2 cm. above the surface of my skin. We removed it and found it was full of yellow gel fragments, while the spot it covered continued to ooze. We didn’t have any more of those bandages, so for the next few days we covered it with non-stick pads wrapped in gauze and ACE bandages. Each following day, the result was the same – the sore had oozed through the outer gauze and was still leaking. She finally bought another gel-based bandage (not specifically a burn bandage), which is on my leg now. It has puffed up to cover the entire dimensions of the sore, but it’s not very tall yet. Still, it’ll definitely need changing tomorrow – otherwise, it’ll start leaking out the bottom.

A trip to the doctor is definitely in order, unless this new bandage performs some kind of miracle healing action. Watch this space for updates.