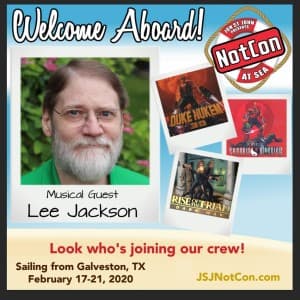 The announcement has been officially made—I’ve been invited to be a special Musical Guest on Jon St. John‘s NotCon at Sea cruise/convention in February of 2020! The official announcement is posted off to the left.

Some of the activities are a little bit better defined than they were in my previous post. Jon says there will be karaoke each night of the cruise for the group. He also said he’d give me some time before the karaoke starts to give away the autographed Calibrations T-shirts and albums. Also, on one night before karaoke, group members will get to hear a special exclusive preview of a finished track from my upcoming second album!

Please click on the announcement graphic or go to JSJNotCon.com for more details about the cruise. I’m looking forward to meeting you there!