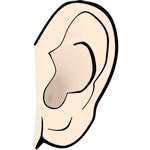 Well, damn, if I’m not back in the doctor’s office again. This time it’s for something on my ear. It’s been there, oh, six months now, maybe more. Something with flaky skin, occasional soreness, and draining. I’d wake up and find red spots on my pillowcase. My wife thought it was me drooling tea. Nope. Too far back. I’d shown it to him when I broke my toe, and he’d said to come back if it hadn’t healed in a few weeks. Well, a few weeks passed, and no healing has occurred. Back in my primary care doctor’s office yesterday (Monday).

The doctor looked at it and flinched a bit. He said it probably needed to be seen by a dermatologist, because he thought there could be the beginnings of a basal cell carcinoma there. However, he wanted to try freezing it off first, just in case. He left for a few minutes and returned with this nasty-looking, hand-held cryo rig. He put it up against my ear and let a couple of blasts go. Oww! Burning cold! He gave it a few seconds, then repeated the procedure.

Basically, that was it. He said to check back in a couple of weeks, but I’ll be recovering from my spine procedure then. We’ll see what happens. In any case, I do not want to have to go to another doctor. I’ve got way too many in my life already. Way, way too many.