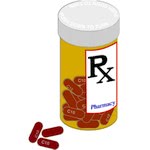 It’s been a rather strange past two days, which is putting things mildly. I have my podiatrist to thank for the weirdness.

I went to my appointment on Friday and had my padding and wrapping unglued, as I mentioned in my last post. I also told him that it really didn’t help very much: I’m still getting pains in my 2nd and 3rd metatarsals (the “bone bruise” or “gunshot” pains), even when I was not standing on my foot. To say he was perplexed would be putting it mildly. He went back and re-examined the last X-rays he took of me where he diagnosed my birth defect, but wasn’t able to see anything that would be causing the pain constantly.

His solution: a prescription for Lyrica. I’d taken it once before when the doctors were trying to find something that would relieve my ankle pain. It made me feel like I was walking around with tunnel vision then. However, I didn’t have the shoebox full of medications back then that I have now for which the Lyrica could interact.

The labeling info for Lyrica says that one of the “Serious Side Effects” of the drug is “Feeling ‘high.'” Hoo boy. Folks in Colorado don’t have anything on this. It gives you a euphoric feeling you don’t get from alcohol, or at least I never did. When I could drink (can’t anymore), I used to get a warm, happy feeling from alcohol. The Lyrica sensation isn’t warm or happy—it’s more like you’re floating around the room in a little cloud of cheery, meek euphoria, but subject to outside interference from others. Your equilibrium is shot to hell, and you may get hit with double vision (that could just be me, due to all of the other medications I’m on).

At one point, you’ll be hit with an urge to sleep, but you won’t be able to at first. It’ll be a couple of hours before you’ll be truly able to crash out, and even after you wake up you’ll still experience some of the symptoms (especially the equilibrium problems).

The worst problem I’ve experienced so far is that it’s making me forgetful. Case in point: I completely forgot to take my 4pm pain medicine dose. I never forget my pain medicine. Not until today.

One odd side-effect it’s given me is coughing. That’s an uncommon one, in the 0.1% to 1% range. Lots of phlegm clearing, which I’m sure is making my wife disgusted with me.

Anyway, it’s supposed to kick in and start acting after a week or so, at which time the “high” feeling is supposed to go away. We’ll see. Anyway, if the Lyrica doesn’t work, the next step for me will be an MRI of my foot. My podiatrist is determined to get to the bottom of this. I’ve gotta give him high marks for that.

Have any of you taken Lyrica? Tell me about your experiences in the comments section! I’m looking forward to hearing from you. Thank you for reading!