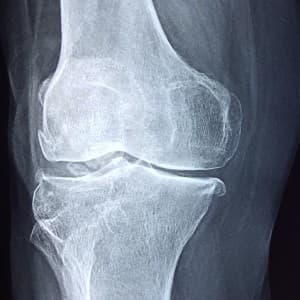 Time for another health update. I view these as writing exercises, so please bear with me as I go through this one.

You’ll note that this update’s picture is of a knee X-ray (not of my knee). That’s because I’m having arthroscopic knee surgery, two days before Christmas. I’ve had problems with my left knee since 1984, when I crashed a bicycle into a curb and went flying ten feet over a sidewalk and into a parking lot. I tore my medial meniscus and scraped the back of my kneecap in the crash. They did arthroscopic surgery, which was still very new in 1984 – in other words, it didn’t go well. Now, I’ve got more torn and degenerated meniscus, severe arthritis on the back of my kneecap, crepitus in my knee, and severe pain when doing daily activities.

It’s going to be a rather rushed job when you factor in our family Christmas trip. How’s this for a schedule:

Quite the compressed schedule, eh? To make things worse, my surgery is scheduled for the afternoon, which means I’ll be fasting (no food, no water) all day long on the 23rd. I’m going to be miserable. The doctor’s assistant has advised me to “hyper-hydrate” for 48 hours prior to surgery, so that a) I won’t be so miserable, and b) I’ll have a good vein somewhere for them to start the I.V. (I have terrible veins – they run and hide at the mere sight of an I.V. needle).

This isn’t the only issue pending surgery. My back is screaming at me again; specifically, my left lumbar region. I’ve had a new MRI done under a 3 Tesla machine (my last one was under a 0.75 Tesla machine), and I’m waiting for an appointment in the new year to schedule another lumbar rhizotomy (due to insurance restrictions). I’m hoping the new MRI will give my doctor a more accurate map of where my problems are so that he can perform a more precise rhizotomy that will last longer this time.

I’m also looking at the possibility of surgery on the bottom of my right foot. I keep getting calluses in the spot where the doctor removed the metal shard, and a recent MRI showed that there might be a deformity below that are that he could shave down which would prevent them from building up in the future. He gave me a cortisone shot in the sole of my foot first (yikes!), but that’s wearing off. I don’t know if he’ll operate or not.

Finally, I’m recovering from an endovenous ablation of my lower right leg. The vascular surgeon accidentally damaged a nerve as she performed the procedure, causing numbness at the top of the skin and pain below. There’s also swelling along the outside of my leg from the bottom of my calf to my ankle, for which she has no clue as to why that’s happening. She could only recommend the passage of time for the swelling, but for the nerve damage she gave me gabapentin – yes, my favorite drug again – and ordered me to take 300mg 3x a day for a month.

That’s about all for the major situations going on in my life. I know none of them are really major major, but they sure add up quickly. I’ll be happy enough to subtract a few rather soon.