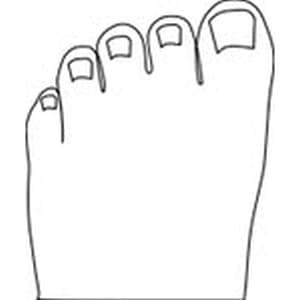 The toe infection saga from this past summer has come back to bite me in the … well, toe, I guess I should say. It’s going to come to a swift conclusion this time around, I hope.

First, a bit of backstory. If you’ll remember, the second toe of my left foot developed a very nasty infection that turned out to be osteomyelitis, or a bone infection. I spent six weeks on extremely strong IV antibiotics through a PICC line, including a week in a hospital and a week in the equivalent of a nursing home. The doctors thought we’d beaten the infection, despite the continued presence of a scab on the toe.

Well, a couple of weeks ago, I had a different problem pop up on my left foot – I caught my fifth toe on a cat scratching post, tearing off both the nail and the nail bed. We treated it at home with antiseptics, but it became infected. A trip to my primary doctor ensued. He put me on a strong oral antibiotic (Keflex) for 10 days.

While I was on the Keflex, another infection broke through the scab on my second toe. That’s not supposed to happen. Whatever had hit my second toe was immune to the Keflex. I had a podiatrist follow-up visit scheduled for a few days afterward, so we put Silvadene on it and bandaged it until the appointment rolled around.

We saw the podiatrist yesterday (Dec. 12, 2018). He debrided the wound down past the subcutaneous fat level and into the muscle. My wife took a picture – be warned, it is not a pretty sight. It is available here. It kind of looks like the Pit of Sarlacc from Return of the Jedi. Anyway, given the history of the wound and its current state, he decided that a partial amputation is in order.

So, on Monday, December 17th, at 5:00 a.m. CST, I go into the hospital for outpatient surgery on my second toe. The podiatrist will start by removing everything up through the first joint. However, if he finds that things are too far gone once he gets inside, he will amputate up to the second joint as well. Afterward, I will be wearing a calf-high surgical boot for at least a couple of weeks.

I sure hope this works. I’ve had to postpone pain-relieving back surgery twice now due to active infections in that toe. I hope this surgery will put an end to them.