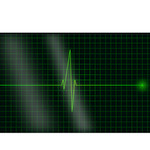 The night in the ER room left me near tears from pain in my back and in my tailbone (those gurney cushions are thin). I also suffered another attack of the upper chest stabbing pains. The nurses gave me another nitro pill in response. It helped, but not as dramatically as the one the paramedics gave me earlier. Finally, they finally gave me a 10 mg hydrocodone pill, which was a mixed blessing: I normally take 15 mg every six hours, and the extra 5 mg I take threw a monkey wrench into their works. They couldn’t figure out how to give it to me, thanks to their wonky computer system. As a result, I only had partial pain relief, which contributed to making the night a living hell.

Just as I began to think the night would never end, a doctor showed up. He smiled, shook my hand, and explained what was likely going to happen to me during the day. One procedure I would undergo would be a nuclear chemical stress test (for which I was fasting—more on it later). I asked him what time it was: he said 7:00 a.m., or something near it. The fact that I hadn’t slept for so long shocked the hell out of me. Anyway, I did get him to have a nurse to check on my pain medicine before he left, which finally resulted in a proper pain medicine dose. It also resulted in the arrival of my wife, who helped to finagle a cup of ice chips for me.

The testing started with chest X-rays, followed by an ultrasound of my heart. It’s hard to explain the pain caused by a heart ultrasound. The technician had to get his probe in between my ribs—hard—and scan while I kept a steady rate of breathing. I couldn’t hold my breath at all, not even from the pain, since it “made my heart go away,” according to the tech. It took what seemed like forever, and it covered three different areas of my chest. I was very sore afterward.

Now, the nuclear chemical stress test turned out to be a different level of discomfort. They gave me a shot of a radioactive tracer first, then scanned my heart. Immediately afterward, nature called, and she had a lot to say. (Have you ever had to use toilet paper with a heparin block and with an O2 Saturation Monitor wire hanging from your index finger? Not an easy task.) Shortly after that little circus finished up, the doctor arrived, which was the cue for the techs to put me on a table and inject me with something called Lexiscan to perform the actual stress test portion of the procedure. The Lexiscan immediately caused my blood flow to increase, making me short of breath, dizzy, and slightly sore in my gut, leaving me generally worn out. For some unknown reason, I had a bad case of hiccups as the tech wheeled me back to the ER room. When I arrived, (*gasp!*) lunch was waiting for me. I ate some of it and finally got some sleep afterward. Several hours later, the same crew came for me and ran the heart scan again to see what changes had taken place due to the stress test.

My wife and I spent some time watching a TV with no remote control after the second scan. Later, my main nurse managed to find a real hospital bed and wheel it into my ER room in place of the gurney bed. I fell asleep again almost instantly, as did my wife (she got a nasty crick in her neck from leaning against my pillow). I almost missed dinner and my pain medicine dose from both of us being asleep. Nice as the bed was, I learned later after my wife went home that it was up too high. I had hell getting out of it to go to the bathroom, nearly blowing out my IV plug. 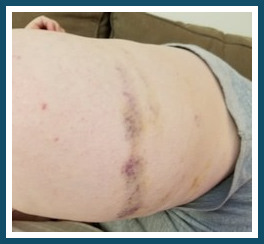 Speaking of IVs and other connections, I should mention the torture device called the blood pressure cuff. I’m no stranger to auto-measuring cuffs: I lived with one on me back in 2009-2010 when I broke both my ankles and nearly died to to blood loss from a botched surgery (a different story entirely). The one in last week’s ER trip was set to go off on the standard 15 minute interval, but it did so with incredible force. I still have bruises on my arm from the compression, as you can see in the picture on the right. That picture was taken on September 29th, 2017. It’s now October 3rd, and the bruises look even worse.

Back to the story. My wife returned the next day at about the same time that the main hospital doctor came into my ER room. The doctor said that all of my tests had come out—wait for it—negative. Yep. Go figure. At least I wasn’t experiencing the chest pains anymore. So, the doctor released me to go home that morning.

As the nurses prepared my check-out papers, my wife helped me out of my hospital gown, scanned me for stray electrode stickers, and helped me get dressed. We left as quickly as we could, with instructions to see my regular doctor sometime this week. I’ll be seeing him on Wednesday.

Now comes the task of letting my other doctors—including my pain management doctor—know about my little two-day run-in with an emergency room. I’m sure they’ll be thrilled.