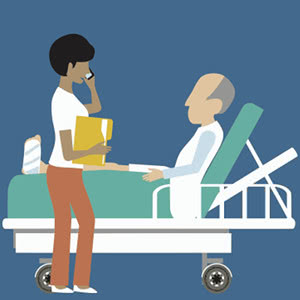 I don’t know what they gave me yesterday for anesthesia, but it was some strong stuff. Whew! I’m still fighting the effects: blurry vision, tiredness, and difficulty concentrating. It’s been years since I’ve been anesthetized that hard.

Well, enough about that. The important stuff is that I’m home and working to recover. I’ve taken my pills—a job in itself—and have already spoken with the Nevro representative about my status. First thing that got checked was my right leg pain. It seemed to be doing fine. My back, though, is still a bit rough and sore from the surgery. I can just barely differentiate normal back pain from leftover surgical pain. The representative said the real difference will probably come through tomorrow. In the meantime, I did some kitchen work, and I did notice increased pain just like before. I’d say I hit a five on the one-to-ten scale, so some tweaking is going to be necessary.

One thing that’s really getting in the way is my nose. It wasn’t involved in the surgery yesterday, but it’s been draining like a bathtub since I got home. I don’t remember sneezing so much in a long time. Whatever is in the air is pounding me hard. I’m resorting to hot jasmine green tea to counter it.

I should probably describe the unit that’s wired into me, shouldn’t I? It’s got two leads going into my back, parallel to my spinal cord. The leads are connected to a battery unit that’s on a strap around my chest. Normally they’d tape it down with Tegaderm, but that stuff gives me blisters if I wear it for more than a couple of days. Therefore, my back is a rat’s nest of non-allergenic paper tape. There’s also a stitch holding the leads in place. I’m not supposed to do any extreme bending, twisting, or lifting (nothing more than 5 pounds) for the entire week.

I’ll get a call from the Nevro representative every day until next Wednesday, when I have an appointment to see my doctor and have the device removed. If it helped, I have to go through the whole approval process again. Upon approval, they’ll implant a permanent version that has a battery under the skin which I’ll have to recharge every day.

Until then, let’s see how this thing works, shall we?