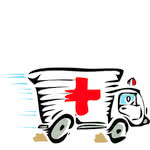 The past few days have been no fun at all, and that’s putting things mildly. Very mildly.

Tuesday morning, I began to get pains in the upper left corner of my chest. Just a brief stab, about a five on a scale of one to ten. They happened about every thirty minutes or so. I wasn’t very worried by them, because I’d had similar pains in the past.

As the day went on, the pains grew more frequent. The intensity and duration remained the same: they just happened more often. By nighttime, they were happening in bouts of every approximately every five minutes, separated by approximately 30 minute breaks.

I hadn’t said anything to my wife about this all day, but then during dinner I started getting constant numbness down my left arm toward my smaller two fingers. The stab bouts became more frequent and lasted longer. I figured that was my cue to talk to my wife about the situation.

We hemmed and hawed about what to do for a few minutes, thinking of how expensive an ambulance ride would be if I was sent home. Finally, we gave in and called 911, figuring they would know best whether or not if I even needed to go to a hospital.

The ambulance arrived within minutes. EMTs began taking my vital signs immediately afterward. After they talked to me about my symptoms and medical history, they decided to take me to a hospital. They loaded me into the ambulance, started an IV, gave me a nitro pill, and hooked me up to an EKG machine. After that, it was off to the nearest hospital that had room available (more on this later).

I had to wait a little while at the hospital while they got a room ready in the ER. During that time, the nitro pill kicked in and the pains stopped happening. The strange part of the pains is that they never showed up on the EKG, despite the symptoms.

Skip forward a bit to me in the ER room, with me on an ER gurney bed (important fact). They continued the IV and EKG and started running blood enzyme tests. Later on, they decided to admit me for observation and testing. The only problem was that they were stuffed to the gills and had no regular rooms. I would have to stay in the ER and sleep (ha!) on the ER gurney.

To add to the fun, they put me on NPO (nothing by mouth) for testing to follow the next day. That meant they couldn’t give me the pain medicine I take for serious pain in my back. On a scale of one to ten, my pain shot up to an eight overnight. Also, I was hooked up to the IV and so many wires that I couldn’t get out of bed to go to the bathroom. I had hell trying to swing myself over the side of the bed to use a bedside urinal, especially considering the pain level, and I’d always have to call the nurses afterward to reconnect something that had come loose in the effort.

I got no sleep that night.